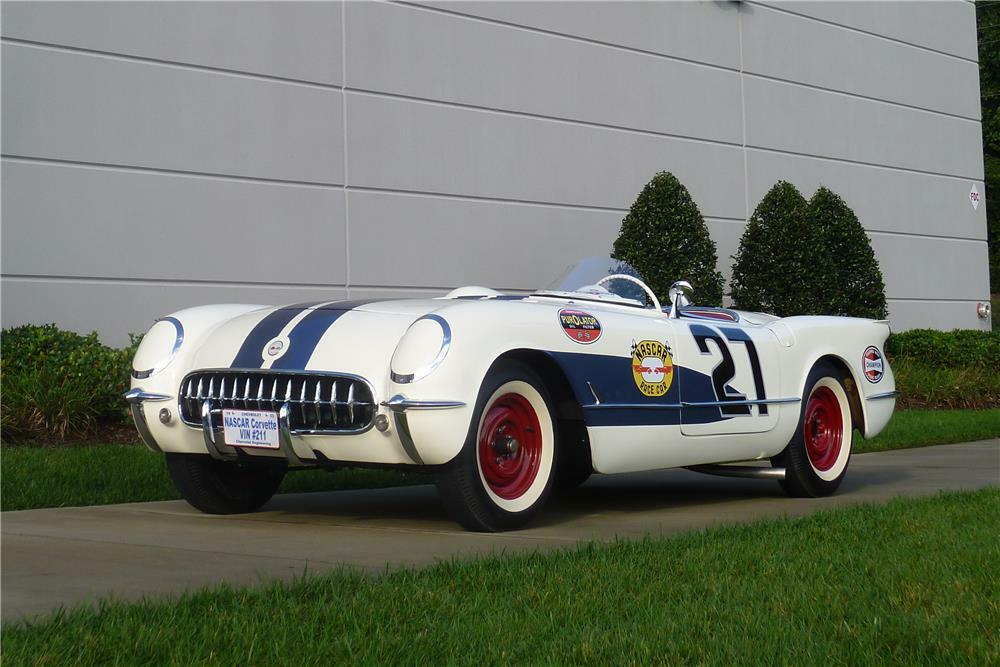 The original Corvette was created by Chevrolet in an effort to steal some thunder from popular British sports cars, but the Vette itself wasn’t much of a performer. It was saddled with a weak straight-six engine and a two-speed automatic gearbox. After a few years of mediocre sales, the Corvette would finally gain its trademark V8 and a four-speed manual. Successive generations of the car would go on to be campaigned in the likes of Le Mans and Daytona, and it’s become a common sight at endurance races all over the world. Read on to learn about our favorite Corvettes to hit the track, from GM teams and from privateers.

As we mentioned, the Corvette was hurting in its first years on sale. For 1955, GM barely moved 700 examples of the car, so they turned to NASCAR and its rising popularity for a marketing push. Although this is a 1953 model Corvette, it wasn’t converted a race car until early 1956, when the engineers gutted it. They replaced the old underwhelming driveline with a 256 cubic inch V8 and a three-speed manual. The body was given a streamlined speedster treatment, with a fiberglass panel covering up the passenger compartment.

The Vette went on to be raced for three years, around stock car tracks in North Carolina. It also raced at Daytona Beach a few times, back before it even had pavement. The performance of this sports car must have won at least a few hearts, because it preceded a sharp sales increase for Chevy, and 60 plus years of Corvette models.

In 1963, team Corvette’s head engineer Zora Arkus-Duntov wanted to put the Shelby Cobra in his crosshairs. To take on the lightweight roadster, he devised the Corvette Grand Sport: a stripped out racer based on the new Stingray design. The car featured advanced cooling systems, feeding an all-aluminum 337 ci V8 that put down 550 horsepower. The car was a formidable performer, and Zora planned to build more than 100 of them.

GM execs unfortunately canned the Grand Sport program before it could properly hit the track, and only five were ever built. Each car had slightly different modifications, and two them were produced with roadster bodies. After the dismissal of the program their racing engines were scrapped, and the chassis were sold into private hands. A few of them were fitted with big block engines, and had semi-successful track careers through the mid-60’s, but we can never really know what the full potential of the car might look like. Similarly to the Cobra, Superformance now produces full replica versions of the Grand Sport, so that’s about as close as most of us will have to experiencing the real thing.

When GM pulled the Vette out of motorsports in ’63, it was nearly for good. There wouldn’t be a factory Corvette team again for over 30 years. In the meantime, third party tuner Callaway stepped in to fill those shoes, with highly modified examples of the aging C4 platform. The car was called the Supernatural, and featured brand new aerodynamic bodywork, almost looking forward to later Corvette production designs. The bubbly front cowl with fixed headlights didn’t quite mesh with the C4’s straight bodylines, but it provided its function.

Underneath was a NASCAR-derived 6.3 liter V8 outfitted with electronic fuel injection. The engine was outfitted with all forged internals because Callaway intended it to be campaigned in the endurance races of Daytona and Le Mans. The Supernatural ran through 1996, taking a few podiums through that time, and paving the way for Chevy’s big factory return to the circuit.

That big return was with the C5.R. Thanks to official backing from GM the race car was able to be developed concurrently with the production C5, and debuted a year afterwards. Compared to the street Vette, this C5.R was longer, wider, with more aggressive aero. At the rear was a large spoiler. Up front, the pop-up headlights were replaced with fixed plexiglass housings. Under the hood was an intensely tuned version of the LS1 V8, punched out to seven liters and putting down over 600 horsepower. With this car, Chevy saw success in both American and European endurance series, and team Corvette has been going strong ever since.

This motorsports history culminates with the brand new C8.R. Like the standard C8 this car departs radically from previous Corvettes. The engine has been moved backwards a good three or four feet. The design of the powerplant is also new, ditching the old pushrod design in favor of a 5.5-liter V8 with dual overhead cams and a flat-plane crankshaft. It shoves 500 horsepower through a six-speed sequential gearbox and fat, slick tires. A wide track and diffusers all around keep the car stuck firmly to the ground, while weight saving materials let it shed 800 pounds off the road car. This design has already taken a few wins for Team Corvette, and is all but guaranteed to rack up more as the years go on.

If you’d like your own piece of Corvette history, consider the C7 Z06 currently in The Starting Line’s inventory. Call (434) 830-1183 or E-mail [email protected] for more info.